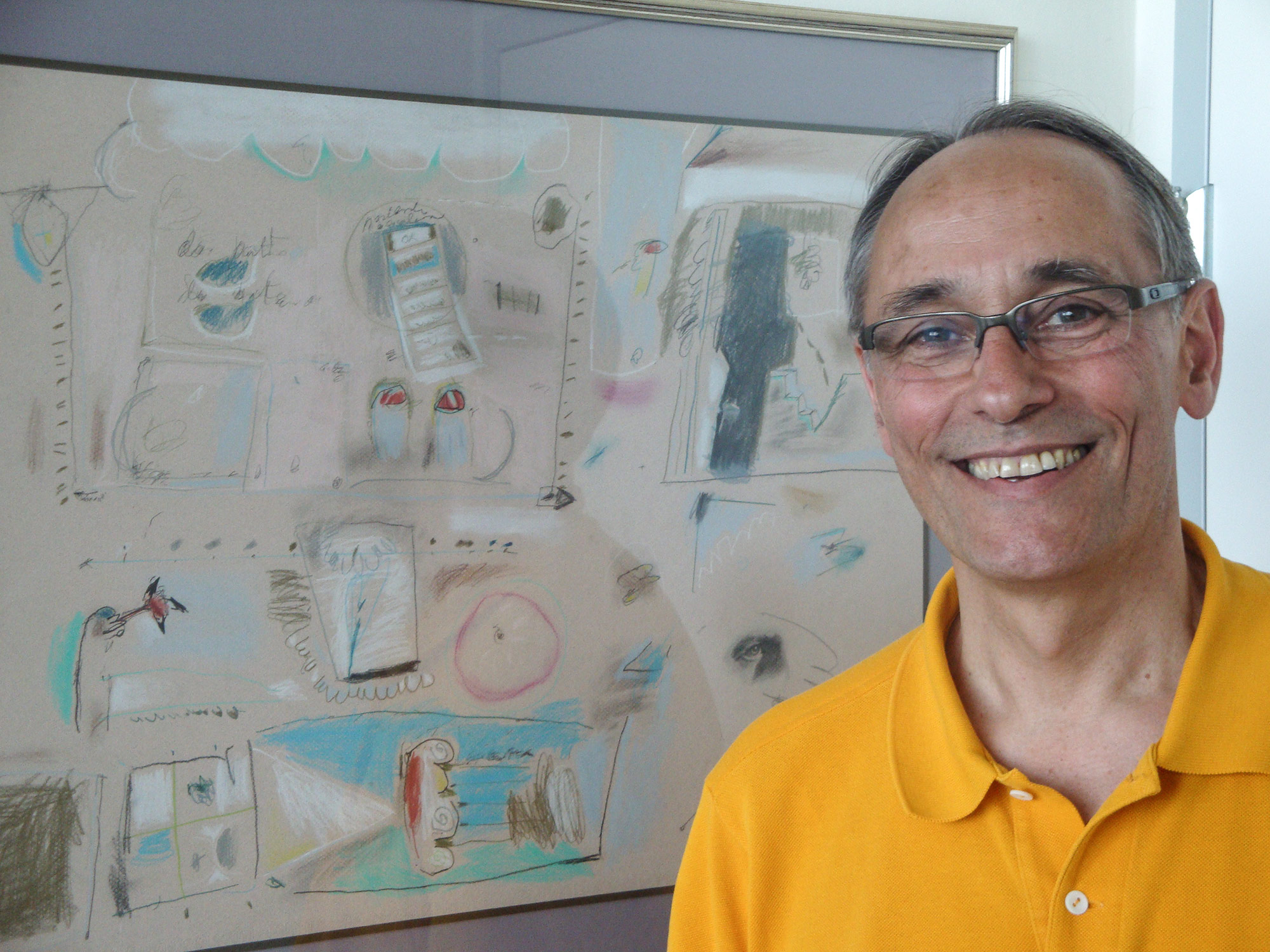 “What has always excited me is the concept of knowing something before anybody else does in the universe” says Prof. Winship Herr. From that perspective, he should probably be judged a happy man, and certainly someone who has chosen the right profession. Indeed, his experimental work on eukaryotic gene expression has led to important new insights in the field. But curiosity can be a stern teacher, operating with bizarre rules. It so happens that over the past years Prof. Herr’s research on HCF-1 – a transcriptional regulator involved in cell proliferation – has guided him into previously unexplored territories, such as metabolic pathologies and tumorigenesis.

“Biologists must constantly keep in mind that what they see was not designed, but rather evolved.”

The long and winding path of a zygote

– Prof. Herr, could you briefly outline your scientific interests and your field of research?

WH: I would like to understand how a single cell, arriving with an instruction manual that comprises two sets of parental information, develops into a human being. Obviously, cell growth and division are fundamental to the ontogenesis of a multicellular organism, but of no lesser significance is the fact that different cells read different chapters of the manual, decoding different parts of their genome at a given time. Or in other words: controlled patterns of gene expression during consecutive rounds of cell division lie at the heart of differentiation. It is within this domain that my field of interest is situated: control of eukaryotic gene expression at the transcriptional level. And what has never ceased to fascinate me is the fact that cell proliferation – cardinal from the very early stages of life – can turn pathological at a later phase, in cells no longer destined to proliferate, resulting in uncontrolled cell growth, as is observed in cancer. As such, several of our research topics focus on understanding how cells retain all necessary instructions for growth, proliferation and differentiation.

HCF-1 is required for cell proliferation

WH: In trying to unravel the mechanisms that control eukaryotic transcription, we study herpes simplex virus host-cell factor-1 (HCF-1), encoded by the HCFC1 gene, which is a key regulator of cell proliferation. Herpes simplex virus 1, causing cold sores, is a highly successful human pathogen, infecting the majority of the human population. The virus is so successful because it may persist in a quiescent form, known as “latent infection”, notably in neural ganglia or it can enter a lytic mode – thereby producing more virus particles – in epithelial cells. The virion contains Virion Protein 16 (VP16), involved in re-directing the infected cell’s gene expression towards viral benefit. Upon infection, VP16 interacts with 2 cellular proteins:

* The POU-domain transcription factor Oct-1, which is widely expressed in adult tissues and regulates numerous genes.

* HCF-1 – also known as C1 Protein – is the protein that has interested me for the major part of the past 25 years. HCF-1 serves as an adaptor protein and links a large number of transcription factors with chromatin-modifying activities, resulting in both activation and repression of transcription.

– Which genes are we talking about?

WH: HCF-1 co-regulates the expression of a great many downstream genes. Actually, this should come as no surprise, given the fact that HCF-1 is required for cell proliferation – cells lacking functional HCF-1 will not proliferate –, a highly complex process requiring the involvement of a multitude of cellular activities.

WH: Over the past years, we have come to discover that HCF-1 co-regulates transcription of genes involved in other processes than proliferation, notably metabolism. Presently, we are focusing on those aspects of HCF-1 in the adult liver.

WH: In mice, we have inactivated the HCFC1 gene in the adult liver and subsequently performed a partial hepatectomy, whereupon the mouse liver regenerates within a few weeks’ time – one of the amazing capacities of a mammalian liver, I should add. This is an elegant model system to study proliferation, as the regenerating hepatocytes will synchronously enter the cell cycle and go through a complete round of cell divisions within 48 hours. However, hepatocytes lacking functional HCF-1 will fail to do so…

– … as the protein is indispensable for cell proliferation.

WH: Exactly. Now, we have observed that under these conditions – HCFC1 knock-out and not performing partial hepatectomy, so as to not induce hepatocytes to proliferate – mice rapidly develop a non-alcoholic fatty liver disease (NAFLD) pathology, a condition whereby there is abnormal retention of lipids within these hepatocytes. NAFLD is the most common liver disorder and related to metabolic syndrome. We consider this to be an important finding, as it establishes a previously unknown link between HCF-1 and liver metabolism.

– Would you consider this research to be clinically relevant?

WH: We have demonstrated that these HCFC-1-liver knock-out mice go through an extremely fast progression of liver degeneration and die within 3 weeks of end-stage cirrhosis. As such, this mouse model recapitulates certain aspects of non-alcoholic steatohepatitis (NASH), the most extreme clinical presentation of NAFLD, and a major cause of cirrhosis of unknown cause – other than excessive alcohol consumption that is –, a process which takes many years in humans. Evidently, we are capable of mimicking the pathological evolution of end-stage cirrhosis within as little as a few weeks: lipid accumulation in the cell, fibrotic tissue, dying hepatocytes and so on. So, from this perspective, I do believe that our research results could have clinical potential…

– … to study certain aspects of cirrhosis.

WH:  Possibly, although I must add that the HCFC1 gene is normally not disrupted in human liver pathologies: our mouse model is an engineered system, which however could be used for exploring new therapeutic routes in the treatment of cirrhosis, at early stages of drug development.

HCF-1: a link between proliferation and metabolism?

WH: As our studies in a non-proliferative system have shown that HCF-1 is involved in other processes than cell proliferation, one of our current research lines is to further explore these functions. For example, high throughput sequencing has revealed a causal link between certain HCFC1 mutations and both intellectual disabilities and cobalamin deficiency.

WH: Right. Actually, a specific function of the HCF-1 protein is to control the activity of genes involved in the processing of cobalamin, or as you say vitamin B12, in particular the MMACHC gene (methylmalonic aciduria (cobalamin deficiency) cblC type with homocystinuria). Cobalamin is involved in methionine and methylation biochemistry, as well as in mitochondrial metabolism – all processes requiring a functional HCF-1 protein.

– Thereby involving HCF-1 in both proliferation and metabolism.

WH: Correct. Now, one of the exciting new research routes in the cancer field aims at elucidating the link between proliferation and metabolism. For example, it has been demonstrated that HCF-1 interacts with the transcription factor E2F1, a central modulator of cell cycle progression, apoptosis and DNA damage response. E2F1 is involved in human malignancies and it has become clear that control of the Rb/E2F pathway is disrupted in many human cancer cells. On the other hand, cancer involves major alterations of cellular metabolism, such as de novo fatty acid synthesis and enhanced glycolysis, the so-called “Warburg effect”.

WH: Rapidly growing tumor cells predominantly produce energy through a high rate of glycolysis, rather than by oxidative phosphorylation. This Warburg effect may be a consequence of mitochondrial dysfunction in these cancer cells, or an adaptation to a low-oxygen environment within a tumor, but it may also be associated with proliferation. Since glycolysis provides most of the building blocks required for cellular growth and division, cancer cells may need to activate the glycolytic route, despite the presence of oxygen. Substances have been developed which inhibit glycolysis and are currently the subject of intense research as anticancer agents.

WH: Let me first point out something else: years ago, Takeharu Nishimoto has identified an HCFC1 temperature-sensitive mutation in cultured baby hamster kidney cells, allowing cell proliferation at 33.5 degrees whilst preventing it at elevated temperature. As a matter of fact, it is exactly through these experiments that we first became aware that HCF-1 is involved in proliferation. What we have done recently is to introduce human HCFC1 mutations into human embryonic kidney cells 293 (HEK293), using CRISPR-CAS9 technology. Now, allow me to elaborate on a text book example of serendipity: as a positive control, we also introduced these hamster temperature-sensitive HCFC1mutations into HEK 293 cells, so all these experiments were carried out at 33.5 degrees. Well, it turns out that the human mutations can also cause proliferation arrest at elevated temperature such that we might not have obtained them had we grown the HEK293 cells at a normal temperature of 37 degrees.

– Whereas the other human HCFC1mutations would allow proliferation at this restrictive temperature?

WH: Precisely. As you know, temperature sensitive experiments cannot be performed in rats or mice, since their body temperature is stringently regulated. But through using CRISPR-CAS9 technology, it now becomes possible to introduce human HCF-1 mutations – for example, identifying rare alleles in patients, through high throughput sequencing in clinical practice – into cultured cell lines and revealing possible temperature-sensitive effects.

– Prof. Herr, the twinkling in your eyes betrays that you consider this to be exciting. Why?

WH: I believe this to be interesting because one of the main processes affected by temperature-sensitivity is protein-protein interactions. As I already came to mention, HCF-1 serves as an adapter that binds to different transcription factors and is part of different complexes that modify histones, for example, thereby regulating gene expression. Probably, HCF-1 uses different protein surfaces to interact with different players. So, we are now in a position to study the effects of HCFC1 mutations, with temperature-sensitive experiments in tissue culture cells.