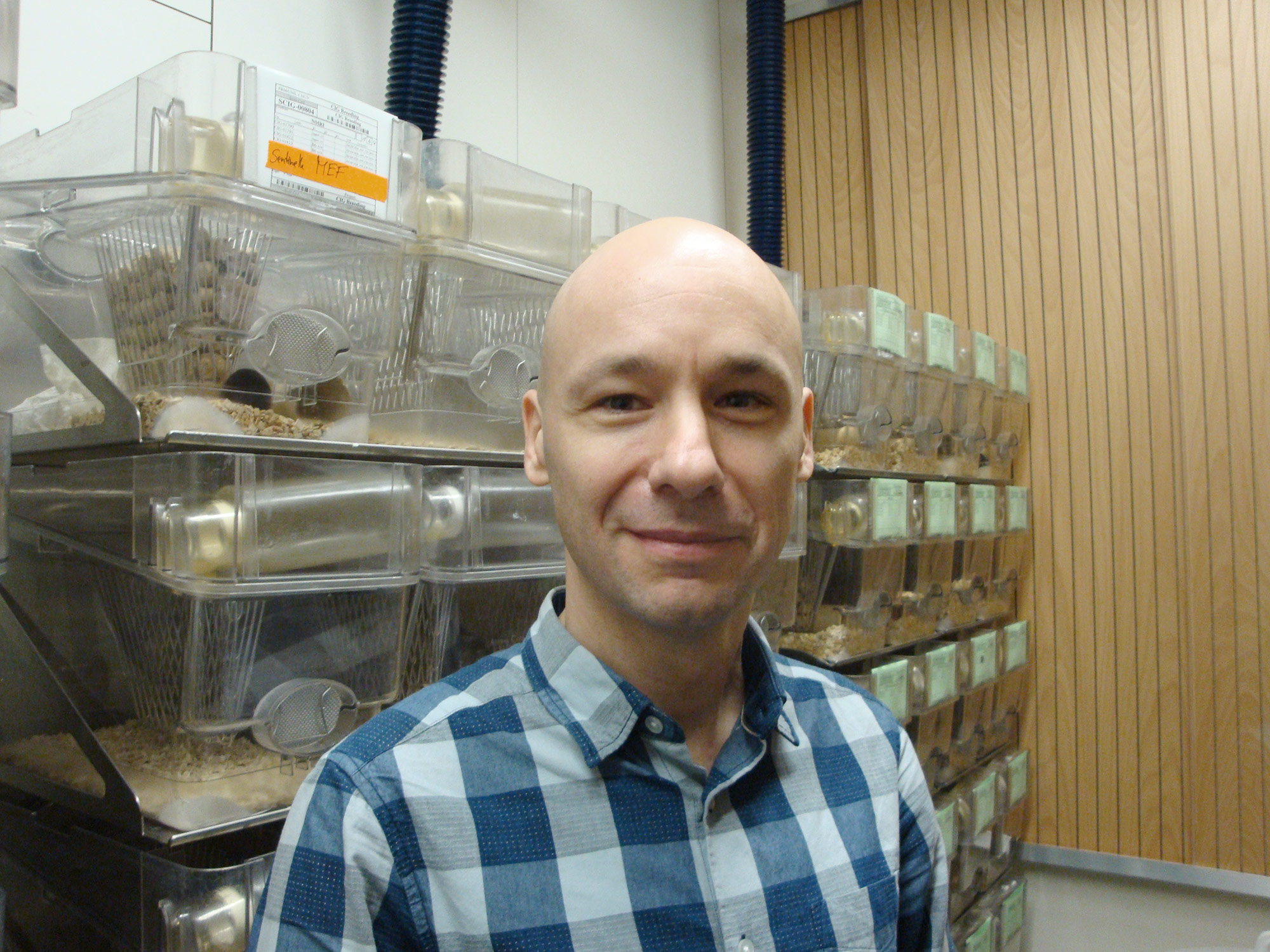 Dr. Frédéric Preitner, Maître d’Enseignement et de Recherche, is Supervisor of the Mouse Metabolic Facility (MEF) from UNIL-CHUV, which provides customized services to researchers in both fundamental and medical research. To that end, a wide repertoire of in vivo techniques and blood assays to analyse the phenotype of mouse models for obesity and diabetes has been established, and new technologies are implemented as required for each individual project. In addition, the MEF staff provides scientific support during data generation and analysis, as well as in the form of teaching and consulting.

–  Dr. Preitner, it is only fair to assume that you are interested in metabolism.

FP: That is correct. Since the beginning of my scientific career, I have been involved in research on metabolic pathologies using mouse models, first on obesity and later on diabetes. During my PhD at the Department of Medical Biochemistry at the University of Geneva, I have been studying the role of β-adrenergic receptor signalling in mediating the control of body weight by the sympathetic nervous system. Later at the University of Lausanne, I did a post-doc at the laboratory of Bernard Thorens on the role of incretins, gut hormones that stimulate the secretion of insulin from the pancreas. Thereafter, I went to the Beth Israel Deaconess Medical Center at Harvard Medical School – an institute that was termed the “Mekka of Metabolism” – to work with Barbara Kahn, who was doing research in the field of obesity and diabetes. There I studied the role of adipokines (cell signalling molecules secreted by adipose tissue) on insulin action and learned to perform microsurgery on mice, such as implanting catheters to infuse the bloodstream.

FP: In September 2006, I joined the CIG – following a phone call from Bernard Thorens, who offered me this challenging position – to develop and coordinate the activities of a mouse metabolic facility that was being set up.

– As one would say: “You were the right man at the right place”.

FP: I leave it to others to make such judgement, but it was certainly a dream come true as this job exactly fitted my expertise and scientific interests. So, I defined what was needed in terms of equipment, expertise and technologies, I hired and trained two technicians and started very early on to provide customized services and to collaborate with other labs.

– What is the value of a mouse model for understanding human metabolic pathologies?

FP: Mouse models are a great tool in translational research to better understand human physiology and pathophysiology as well as drug discovery. It is of course legitimate to ask: “What is a good animal model?” Allow me to give you a somewhat provocative answer to that complex question: “Man is a bad model for human pathologies”.

– Dr. Preitner, I believe this statement calls for an explanation.

FP: Clinical trials in human patients show that the efficacy of many drugs to treat complex pathologies – and I am not talking about an aspirin, right now – has a broad spectrum among cohorts, patients, sex, etc., ranging from highly efficient to more or less “useless”. The same holds for secondary effects of a given medicament, which can be very variable and patient-dependent. And this both illustrates the heterogeneity of a lot of human pathologies and our individuality at the physiological level.

– It is not for nothing that clinicians have entered the era of personalized medicine.

FP: Exactly, we are all different and a lot of complex pathologies are multifactorial, involving many genes and/or environmental determinants. From that perspective, Homo sapiens could indeed be judged as a poor model to understand human pathologies. Actually, there is no such thing as a single all-encompassing animal model. But as long as we are aware of those limitations, a given animal model – be it a rat, a worm or a fruitfly – can be very valuable for recapitulating certain aspects of human biology. For example, the worm C. elegans is used to study fat metabolism.

FP: A mouse is a valuable model for genetic biomedical studies, by virtue of the similarity of fundamental physiological processes that are shared with ourselves; 99% of mouse genes have a human homolog and for nearly three decades very powerful genetic tools have been available to manipulate the mouse genome. Moreover, the small size of mice, compared to other rodents – for example, a mouse is ten times smaller than a rat – does not only have advantages in terms of housing and food, it also significantly reduces the amount of a compound required in vivo, both for academic research and for drug development studies.

FP: …but has certain physiological implications: mice have for example a higher metabolic rate and a higher cold sensitivity than humans. But, having said this, several inter-species metabolic differences are attenuated when environmental conditions, such as temperature, diet, etc., are set appropriately. We thus can work at making a mouse a better model…

FP: Rats were most widely used for biomedical research, until the development of genetic tools shifted the interest towards mice. Keep in mind: the first knock-out mouse dates back to 1989. For technical reasons, it has turned out to be more difficult to generate genetic tools for rats and as such, these tools have been developed far more recently. For example, you need embryonic stem cells to generate transgenic animals, which has turned out to be much easier to obtain in the mouse versus the rat. But of course: “Never say Never” and who knows that in the future part of the MEF may become a rat metabolic facility.

Major developments in the field

– Have you witnessed major developments in your field, over the past decades?

FP: When I started my PhD in 1995, insulin signalling was basically a “black box”. The insulin receptor had just been cloned, and a revolution was the discovery of leptin, a hormone predominantly produced by adipose cells, the deficiency of which is responsible for the massive obesity observed in the ob/ob mouse. This was a game changer in the field, because it was the first demonstration of a hormone playing a fundamental role in the control of body weight and energy homeostasis, in both humans and mice. Genomic sequencing did not yet exist and researchers had first to clone their genes of interest to study their pathophysiological role, thereby using for example knock-out mice. During these days, expectations were high to understand the genetic basis of diseases by using targeted gene approaches, but the delusion came following the observation that monogenic mutations that lead to dramatic obese-diabetic phenotypes in mice – such as, for example, in leptin or melanocortin receptor 4 genes – are found in only a very small proportion of patients, worldwide. Consequently, it was realized that many human metabolic pathologies – as we just came to discuss – are heterogeneous complex, systemic diseases involving multiple genetic and environmental factors, and that unbiased genetic approaches are required to link genetic variants to phenotypic traits.

FP: Another big issue was the sequencing of the mouse genome, which has allowed the advent of several international initiatives aiming at generating mice mutant lines for each gene of the genome and screening them through high-throughput phenotyping pipelines.

– Could you please comment on the concept “phenotyping pipelines”?

FP: What I mean is that a very great number of knock-out mice are being generated – the idea is to ultimately obtain a KO mouse for every single gene in the genome – and need to be screened for phenotypic traits. In order to accomplish that, phenotyping pipelines have to be set up. As a matter of fact, the MEF has been involved in this undertaking, to assess the quality and progress of the phenotyping for obesity and diabetes traits. We have also characterized some of those mouse lines into more detail, refining the phenotyping. And it can be expected that faster and more affordable genetic tools, such as CRISPR/Cas9 technology for example, should facilitate the generation of transgenic mouse models for phenotyping.

What brings the Future?

– Are there so-called unmet needs in your field? Things that you would like to see changed?

FP: I expect that direct measurements of metabolic fluxes will become a big issue for the future, as it is the ultimate demonstration of a metabolic change. And of course, one can make more or less reliable predictions about metabolic changes in an organism, on the basis of alterations in gene expression levels, for example, but that is not the same as actually measuring alterations of fluxes within complex metabolic networks. At the MEF, we presently use radioactive compounds to measure systemic glucose fluxes in diabetes, but such tracer studies are usually complex and expensive. Therefore, more streamlined and cheaper methods allowing simultaneous multi-metabolite tracing in multiple-organs are needed.

– And how could this be accomplished?

FP: Researchers in the field expect a lot from recent advances in the use of some non-radioactive isotopes and technologies as mass spectrometry or NMR, which certainly offer compelling perspectives. Needless to say, that we are highly interested in such methodologies, which over the coming years we would like to implement, in collaborative efforts with expert laboratories in the Lausanne scientific community.

– Other changes to be expected?

FP: The field is clearly joining the “Big Data” revolution, which means the implementation of more holistic approaches that use computational tools to associate phenotypic data with gene and protein expression profiles (transcriptomics, proteomics) as well as the determination of metabolite profiles, the emerging “metabolomics”, and metabolic fluxes. These computational methods will certainly evolve to deal with the increasing complexity associated with the handling of such complex data. Moreover, technologies and methods will become increasingly complex and “multidisciplinarity” will certainly become a key word during the years that lie ahead.