“You come to Estonia?” 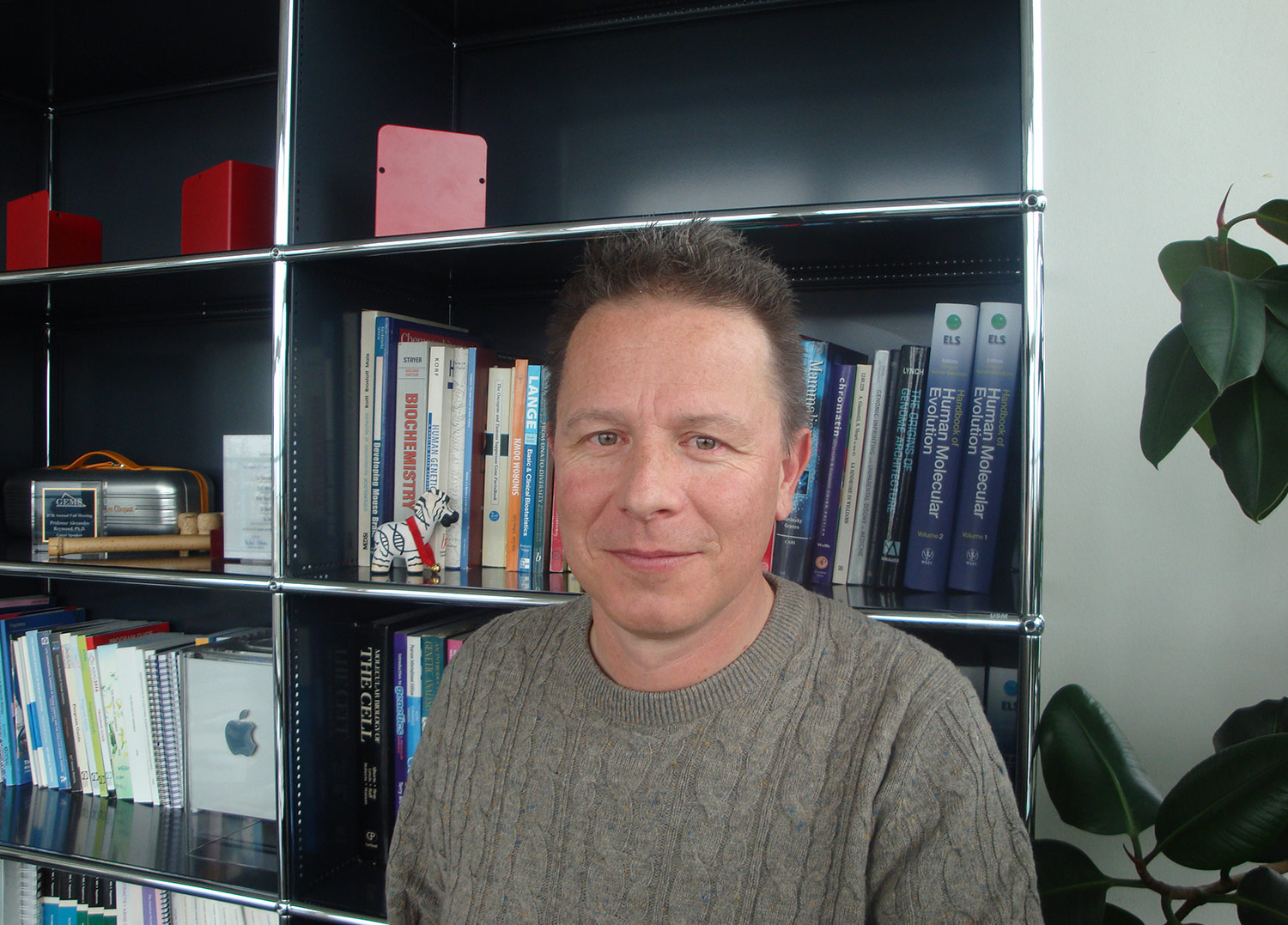 “I hope that I will remain original and be able to answer cool questions” answers Prof. Alexandre Reymond – in a rather pensive manner, after what seemed to be a long pause – when asked about his scientific dreams. And one cannot but conclude that the Gods of Science are offering him ample opportunities to do so.  Indeed, Prof. Reymond and his team are exploring a new field in human genomics: DNA copy number variants and complex disorders, such as autism spectrum disorder. Their research has lured them into previously unknown territory: primary cilia malfunction and ciliopathies.

«The ever-quickening advances of science made possible by the success of the Human Genome Project will also soon let us see the essence of mental disease. Only after we understand them at the genetic level can we rationally seek out appropriate therapies for such illnesses as schizophrenia and bipolar disease.»

– Professor Reymond, could you briefly outline your research domain?

AR: Our field of interest is human genetics. We are trying to understand how the structural organization of the human genome is associated with a particular phenotype. In most cases, we are unraveling the causal link between genome architecture and severe, that is to say, pathological phenotypes.

– A statement in one of your recent publications intrigued me. Allow me to quote: ”Any two human individuals differ on approximately 0,8 % of their genome length.” Are my chromosomes that much longer than yours?

AR: Not necessarily. The genome length per se between two individuals is comparable, but one person may possess DNA fragments which the other one lacks, and vice versa. The point I want to make is this: it is generally accepted that a chimpanzee’s genome is 98.8 % similar to ours. As a matter of fact, this only holds for the part of both genomes that we can align. It is quite conceivable that Homo sapiens contains additional chapters in his “Encyclopedia of Life”, so to speak, which you would not find in the chimp’s DNA book – and again vice versa –, making both species more different at the genomic level than this 99-odd percentage suggests. Likewise, two individuals may possess different DNA segments within their respective genomes.

– And part of these differences can be accounted for by copy number variants?

AR: That is correct. Some inter-individual variation between genomes can be accounted for by CNVs, whereby sections of the genome are repeated and the number of repeats varies between two individuals in a population. Copy number variation is a type of structural variation, involving duplication or deletion events that affect a considerable number of base pairs, ranging from a few kilobases up to more than one megabase (i.e. 1 million base pairs).

– Are there hotspots or are CNVs scattered all over the genome?

AR: Both: copy number variants are spread all over the genome, but there also exist hotspots. The database of genomic variants catalogs around 2.4 million CNVs, mapping to 200,000 unique loci. Recurrent CNVs are appearing and disappearing, such that the number of copies at a given locus is changing over different generations.

– How do CNVs come into existence?

AR: One mechanism by which CNVs are born is through non-allelic homologous recombination, resulting from a misalignment between two DNA segments that share high sequence similarity but are not alleles. As a result of such “illegitimate” genetic rearrangements, genomic segments may be deleted or multiplied, giving rise to the copy number variation observed. Such phenomena can allow for evolutionary innovation, resulting for example from modified spatio-temporal expression patterns of genes at a particular locus. On the other hand, the same mechanism can also give rise to genetic disorders, caused by either loss or increased copy number of genes. As such, copy number variation illustrates perfectly how nature balances between perfectionism and imperfectionism: the never-ending conundrum that has been driving evolution on this planet.

– Many disease-linked CNVs are associated with pathologies of the central nervous system. How come?

AR: The likelihood that a given copy number variant affects cognition or intellectual abilities rather than cardiac function, for example, is higher because more genes contribute to the structure and function of the brain than of the heart or the kidney. So, the answer to your questions is: yes, CNV-linked pathologies are often defects of the central nervous system, but there are no a priori reasons to believe that there exists a bias towards neurologic disorders.

AR: During hominoid evolution, two of the most proximal bands of the short arm of human chromosome 16 – that is to say, chromosomal bands 16p11.2 and 16p12.1 – have accumulated low copy repeats, which are expanding in size through the human lineage. One of our research topics focuses on the 16p11.2 copy number variant, which is, with a prevalence of about 0.05 % in the general population, among the most frequent known etiology of autism spectrum disorder (ASD). We have shown that the number of genomic copies negatively correlates with body mass index (BMI), head circumference and the size of the brain regions involved in reward, language and social cognition.

– Are there genes located at this genomic region?

AR: Yes, 16p11.2 is a gene-packed chromosomal area, containing more than 40 genes. We have observed that genes differentially expressed in 16p11.2 copy number variants are modified in their chromatin interactions, suggesting that chromatin disruption participates in the observed phenotypes.

AR: Historically, associations between a genetic defect and a pathological phenotype have been revealed through comparisons between a clinically defined- versus a normal population, in search for a statistically significant higher incidence of a particular genetic defect in the clinical cohort. However, such kind of approach does not reveal any information about the phenotype of a person in the control group, affected by the same genetic alteration. Likewise, the link between copy number variants and autism has been almost exclusively studied in clinical cohorts. In other words, the relative contribution of the 16p11.2 CNV to cognitive phenotypes in the general populations remains unknown. In order to study the full penetrance of the 16p11.2 CNV in an unselected population and its relative contribution to cognitive phenotypes in carriers without clinical pre-selection, we analyzed the Estonian Genome Center’s cohort.

AR: Estonia has been visionary in its data collection. No less than 5% of their adult population is “banked”, meaning that DNA and cell samples have been collected, along with a questionnaire of 1500 questions on lifestyle, clinical parameters, BMI, family data, etcetera. As such, these data comprise a unique biobank of clinically relevant information that has been instrumental in answering our question: “What are the phenotypes of 16p11.2 CNV affected persons in control groups?” As I just said, our aim was to unravel the variance of the phenotypes associated with the 16p11.2 CNV.

AR: On the one hand, perhaps not surprisingly, we have been successful in characterizing the more severe cases because they are more likely to end up in the clinical population. But on the other hand, we could demonstrate that the phenotypes of carriers of the 16p11.2 CNV genomic lesion are reminiscent of the phenotypes of carriers of identical rearrangements in the clinical cohort. In most cases the phenotypes in the control population turned out to be mild ones, explaining why these persons were not diagnosed as ASD patients.

– Why does one carrier of the 16p11.2 CNV genomic lesion present with a much stronger phenotype than another one?

AR: The answer to that question is unknown but presumably there is a link with other genetic and/or lifestyle traits. The question we are presently trying to answer is: “Is there another genetic alteration which can explain mitigation or increased severity of the 16p11.2 CNV associated phenotype?” To that end, we are comparing the genetic profiles of 16p11.2 patients with severe or mild phenotypes. In some cases we have found genetic alterations that could be associated with the variance of the phenotype.

– Would it be possible to study these phenomena in the “clean genetic background” of an animal model system?

AR: Yes, part of our research is carried out by using mice and zebrafish. We have observed that the 16p11.2 CNV genomic lesion is not only linked to autism spectrum disorder, but also predisposes to obesity and macrocephaly: phenotypes that are amenable to study in animal model systems. Among the genes directly perturbed by 16p11.2 copy number variants, suppression of the fish KCTD13 – encoding a potassium channel tetramerisation domain-containing protein – induces macrocephaly in zebrafish embryos, whereas the reciproical overexpression of the human KCTD13 gene can induce microcephalic phenotypes with a concomitant reduction in neurogenesis.

Dysregulation of ciliopathy genes contributes to  the 16p11.2 CNV pathology

AR: Quite a few of the genes at the 16p11.2 locus seem to be functionally linked. We have performed transcriptome profiling on 16p11.2 deletion and duplication carriers, in trying to answer the question whether reciprocal deletions or duplications correlate with cellular activities that might reveal information about the pathological mechanisms involved in ASD. In doing so, we observed a significant enrichment of expression level changes in signal transduction pathways relevant to neurodevelopment and primary cilia function. We have also demonstrated that ciliary gene expression is perturbed in orthologous mouse models…

– …raising the possibility that ciliary dysfunction contributes to the 16p11.2 pathology.

AR: Exactly. Primary cilia function as mechano- , thermo- or chemosensors, providing a cell with vital information on external conditions. They can be viewed as sensory antennae that play a role in coordinating signaling pathways, involved in a wide variety of cellular functions. Or in other words, primary cilia constitute a kind of cellular global positioning system, allowing the cell to detect and adapt to changes in the surrounding environment.

– Why would primary cilium malfunction be specifically linked to autism spectrum disorder? Would you not intuitively expect it to be associated with a wide variety of symptoms?

AR: Actually, cilia malfunction has been implicated in a wide variety of human diseases. Ciliopathies – a class of genetic multisystemic disorders, caused by genes that affect ciliary structure and function – are unified by shared clinical features, such as mental retardation, cystic kidney, retinal defects and polydactyly, and result in chronic disorders like primary ciliary dyskinesia, polycystic kidney disease, orofaciodigital syndrome or Bardet-Biedl syndrome: a pleiotropic disease, characterized by obesity, retinitis pigmentosa, hypogonadism and renal failure. As a matter of fact, we also observe pleiotropic phenotypes associated with 16p11.2 copy number variants: in addition to cognitive dysfunction, ASD patients are more likely to be obese and have macrocephaly – as I already came to mention – and often face malfunctions of the kidneys and the reproductive system. Moreover, we have shown that overexpression of BBS7, encoding the Bardet-Biedl syndrome 7 protein, rescues head size and neuroanatomical defects of KCTD13 morphants, i.e. zebrafish treated to decrease expression of this gene. On the other hand, we could demonstrate that suppression or overexpression of CEP 290 – encoding a centrosomal protein that plays a critical regulatory and structural role in primary cilium formation – rescues phenotypes induced by KCTD1 under- or overexpression. These data strongly suggest that dysregulation of ciliopathy genes contributes to the clinical phenotypes of 16p11.2 copy number variants.