“Let there be light!” 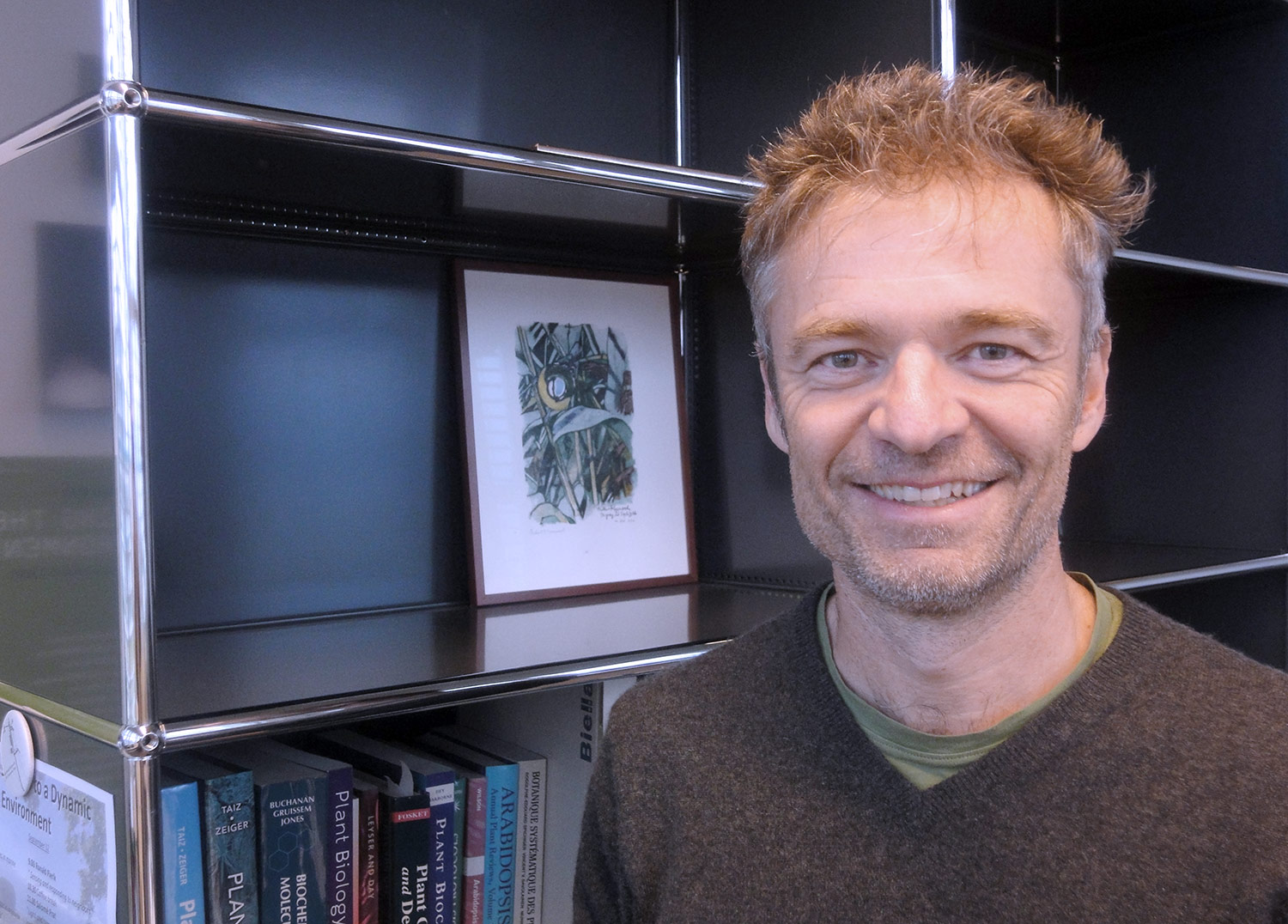 Plants are weird forms of life: they just sit around all day whilst the sun provides their elixir of life: light. Arabidopsis thaliana, for example, has no less than 5 different families of photoreceptors, which capture light with great eagerness. But what happens if the neighbouring oak tree gets too big and casts a dark and gloomy shadow over its surroundings? Believe it or not, the tiny Arabidopsis has seen this coming from the very beginning – a phenomenon termed “neighbor detection” – and has already taken all possible precautions to secure the species’ survival. Prof. Fankhauser and his research team are trying to unravel the mechanisms that control the shade avoidance response in plants: a highly sophisticated machinery, involving hormonal signals and all-encompassing transcriptional events that provoke the appropriate physiological and development responses. Welcome to the world of plants.

“Will you please step out of my sun?”

Diogenes to Alexander the Great (around 330 BC)

Why study light response in plants?

– Prof. Fankhauser, what is the topic of your research?

CF: Essentially, we try to understand how the environment affects growth and development in plants and the environmental factor under scrutiny is light.

– Allow me a simple question: why plants and why light?

CF: It is often easier to study phenotypic plasticity in plants than, for example, in mammals, whose anatomy is much more pre-defined and genetically determined – at the end of mammalian embryogenesis all the anatomical parts are basically present and the next thing happening is growth, to put it somewhat simplified. Plants, on the other hand, have very few organs at the end of embryogenesis: an embryonic stem or hypocotyl, a short root, one or two embryonic leaves – depending on whether the plant is monocotyledonous or dicotyledonous – and populations of stem cells, the meristems. Moreover, both the nature and the shape of plant organs – for example, the decision to produce more leaves versus reproductive organs – depends much more on environmental factors, such as the photoperiod, for instance. As for the second part of your question: why light? Because light is a vital resource for a plant, as it is used for photosynthesis, to which they constantly have to adapt. Moreover, it is a parameter which can easily be modified under experimental conditions.

Who shut down the light?

– You study plant growth and development under limited availability of light resources. Why?

CF: One of the big challenges for plants – sessile organisms, by the way – is that they have to cope with extremely variable amounts of light. On the one hand, a plant has to cope with excess light, a potentially threatening situation that can lead to photo-oxidative damage. On the other hand, light availability can be limiting, like for example in agricultural environments where farmers mostly plant at high density: conditions where plants start to shade each other. This leads to a developmental response, which is termed “shade avoidance”. So, when a plant is confronted with a “low light” environment, it has to figure out whether this condition is transient – the result of a cloudy day – or tends to be more permanent because another plant is capturing its light, in which case the situation is much more serious. The plant can distinguish between both conditions by “reading” the spectral properties of the light it receives. The spectral properties of light which is filtered by another plant are namely highly specific, because chlorophyll absorbs light in the blue and the red portion of the electromagnetic spectrum. In other words, a plant growing under a canopy will receive less blue and less red light, whilst still receiving green and far red light. Consequently, the ratio red/far red light that a shaded plant receives will drop: the plant will sense that there is competition for light resources and that action has to be undertaken to secure its survival.

CF: It has been demonstrated in Arabidopsis that shade avoidance is mediated through phytochromes, cytosolic photoreceptors that in response to certain light conditions become localized in the nucleus and provoke a transcriptional response. As a matter of fact, we have demonstrated that phytochromes have to be localized in the nucleus to be biologically active and we have also identified a key element that controls their nuclear import. Now, some 15 years ago the PIF transcription factors (Phytochrome Interacting Factors) were discovered, which directly interact with phytochromes in a conformation-dependent manner. Phytochromes can namely adopt two different conformations: a dark state under shade conditions and a lit state – induced by sunlight – which interacts with these PIFs. We have shown that the abundance of PIF transcription factors is regulated by light. That is to say, PIFs are abundant in the shade, whereas in the sun – when phytochrome folds into the lit conformation and interacts with PIFs – they get rapidly degraded. Based upon this observation, we postulated that PIFs actually promote shade avoidance in Arabidopsis: a response characterized by, for example, elongation of stems, elongation of petioles and upward movements of leaves. Once we had established this basic model and confirmed it through genetic experiments, we have been characterizing genes regulated by PIFs with the aim of unraveling the molecular mechanisms controlling the shade avoidance response at different developmental stages in Arabidopsis:

– In seedlings, we study the elongation of the hypocotyl.

– At later stages of development, we study how leaves develop and move into an optimal position, a process which can be studied in real time.

– And we study the transition to flowering, a phenomenon that is accelerated under limiting light conditions and whereby a signal must be transmitted to the apical meristem – which contains the stem cells – stating: “Conditions are sub-optimal. Stop making leaves and start to invest into reproduction”. It is a complex story to disentangle, because of the presence of multiple PIFs, each of them playing a somewhat different role, depending on the developmental stage and/or environmental conditions. Moreover, the sites of perception and response to light do not always coincide, leading to fascinating inter-organ communicaton.

CF: Our transcriptome profiling experiments have shown that 4 Yucca genes – encoding enzymes involved in the biosynthetic pathway of auxin – are rapidly induced, within 15 minutes, as a response to shade. A plant lacking these 4 shade-induced Yucca genes is essentially devoid of several shade-induced responses: hypocotyls and petioles no longer elongate, whereas leaves no longer move up.

– This brings auxin into the picture, I assume?

CF: Exactly. Although auxin was the first plant hormone to be discovered – as far back as the 1930’s – we had to wait until 2011 for the unraveling of the major auxin biosynthetic pathway, controlled by 11 Yucca genes.(*) Auxin is produced in young leaves from where it is transported through well-defined routes to petioles and stems to promote their elongation. Interestingly, several genes encoding auxin transporters are also upregulated in response to shade. Controlled auxin transport lies also at the basis of asymmetric growth underlying phototropism – directional growth towards the light, that is – another low light response that we study.

– Are these 4 Yucca genes to be considered as central regulators of the shade avoidance response?

CF: They are essentially components that promote cell elongation: hypocotyl and petiole growth are primarily due to cell elongation, with little or no cell division taking place.

CF: At present, we are much interested in a phenomenon that is still poorly understood, namely the fact that different plant organs show a different response to shade. For example, under limiting light conditions for a seedling, the hypocotyl will elongate whereas growth of the cotyledons is decelerated. For this reason, we have performed transcriptome profiling experiments comparing light and shade conditions, not on entire seedlings as we initially did, but on cotyledons and hypocotyls, separately. In this way, we try to explain in molecular terms how the same cue leads to a different growth response in these two organs.

– But somehow these different physiological and developmental processes must be integrated into an all-encompassing response to that particular environmental cue, right?

CF: Absolutely. As a matter of fact in nature multiple photoreceptors sense the environment, and that information has to be integrated. For example, we recently showed how cues from phytochromes informing plants about foliar shade enhance the phototropic response that is controlled by another photoreceptor. Moreover, a plant is not necessarily in a homogeneous environment, meaning that different leaves or branches – for example, in trees – have to deploy different strategies. As such, we are aiming at an integrated view of photomorphogenesis in Arabidopsis.

– Is this your scientific dream?

CF: I would indeed love to understand – both in a detailed and a more “holistic” manner, if one could call it that way – what is happening in a plant, from the moment photons hit their photoreceptors to how this plant in response decides ”now I should grow” and “in which direction?” or “now it is time to flower”. Very interesting in this context is the process of resource allocation. If you think about it: the leaves are the photosynthetic organs of a plant, whilst the stem is almost not involved in photosynthesis. Nevertheless, the stem somehow needs to have access to resources and a central question is: “How are these resources then re-allocated?” A fascinating question, which presently is poorly understood.

(*) CF: There is a funny anecdote behind this year-long hunt for the characterization of enzymes involved in auxin biosynthesis. Just before I left Joanne Chory’s lab at the Salk Institute in San Diego, I was involved in an “activation tagging”- project: randomly inserting a strong promoter into the Arabidopsis genome and searching for interesting mutant phenotypes. Now, one of the mutants I found had a long hypocotyl, a phenotype characteristic for a dark-grown plant. I actually mapped the gene, which encoded some weird enzyme and I remember thinking: “What the hell is this?!”

– I will write “the biological significance of this observation was not entirely clear”.

CF: (laughs) Yeah, do that. Ten years later, it turns out that this enzyme constitutes the rate-limiting step in the major auxin biosynthetic pathway…