“Can you sense it in the air?” 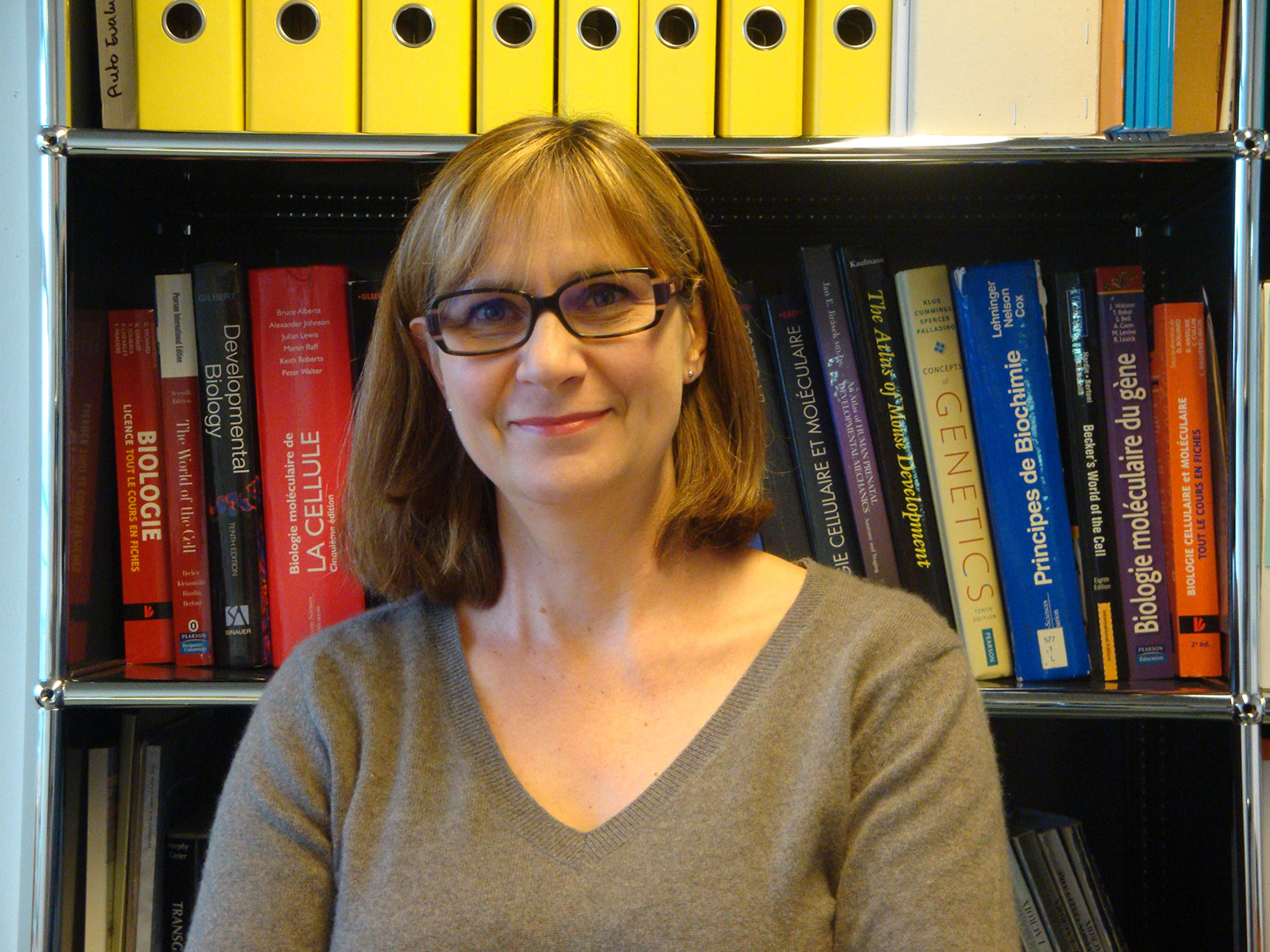 Already from the “very beginning”, Prof. Liliane Michalik found the research topic that will most probably stay with her for the major part of her scientific career: unraveling the mechanisms that guide transcriptional control by peroxisome proliferator-activated receptors, otherwise known as “PPARs”. Indeed, a remarkable family of fascinating proteins, functioning as molecular sensors – thereby interpreting a great number of environmental cues – that play a fundamental role in a multitude of cellular processes. Prof. Michalik and her team are focusing on the function of PPARs during skin response to environmental insults, such as mechanical injuries and ultraviolet rays.

” Beauty, to me, is about being comfortable in your own skin. That, or a kick-ass red lipstick.”

– Prof. Michalik, could you briefly explain: what are PPARs?

LM: PPARs are transcription factors of the nuclear hormone receptor family, discovered around the early 90´s, that form part of a cellular sensing system. As such, they are capable of “reading” molecular signals – more specifically: fatty acids and derivatives, which function as agonists – and provoking an all-encompassing transcriptional response, allowing cells to adapt to the environment. In mammals, there are four PPAR proteins – PPARα, PPARβ and PPARγ1 and PPARγ2, referred together as PPARγ – which play essential roles in the regulation of cellular differentiation, development, metabolism and tumorigenesis of higher organisms. For example, PPARα is involved in energy homeostasis and cholesterol metabolism, and plays a role during the inflammatory response; PPARβ is also involved in energy homeostasis, apart from its role in regulating the activity of heart and skeletal muscles; and PPARγ is a major actor in adipose differentiation and metabolic functions, and possesses anti-inflammatory activity.

– For many years now, your research has been focusing on PPARs. Where does this fascination comes from?

LM: I have always been interested in transcriptional regulation whereby cells are entering an abnormal differentiation pathway or are being steered into an otherwise pathological route, eventually leading to cancer or other systemic diseases. Now, PPARs constitute an excellent experimental paradigm to study the “How?” and “Why?” of transcriptional regulation of cells “out of control”. Basically, our research aims at understanding how our genome translates environmental insults into cellular responses.

– Are you focusing on receptor-ligand interaction or hunting for genes which are under transcriptional control of PPARs?

LM: Both. We have invested part of our research in unraveling how the ligand binds to a given PPAR receptor, thereby inducing a conformational change. But presently, our main research efforts are directed towards transcriptional output of PPARs and trying to understand how a given ligand can trigger a gene expression program in the cell.

– And what type of experiments is your team doing?

LM: Our experimental paradigm is the skin: our largest organ, which constitutes the main interface between ourselves and “the world out there”, providing protection against harmful conditions, such as mechanical damage, microbial invasion or solar radiation. As a matter of fact, our skin constantly receives a multitude of environmental signals, and over the past years we have explored how PPARs control the skin’s responses to mechanical injuries, allergens and ultraviolet rays. To that end, we use murine and human skin as valuable model systems.

LM: We initially studied the role that PPARs play in responding to mechanical injuries of the skin and unraveling the molecular mechanisms involved. We have identified cues that activate PPARs and steer keratinocytes into a transcriptional program aimed towards wound healing. For example, we showed that in response to a skin injury, PPARα is crucial to maintain a normal inflammatory response, whereas PPARβ promotes differentiation of keratinocytes, controls their proliferation, favors their resistance to apoptosis and promotes their directional migration towards the damaged area.

– Have you identified target genes of PPARs in this experimental setting?

LM: Yes, we have identified some direct target genes of PPARs in rat keratinocytes, following mechanical injury. For example:

* The ILK gene encodes the Integrin-linked kinase, thought to play a role in tissue homeostasis. ILK-1 is involved in integrin-mediated signal transduction and is associated with multiple cellular functions, such as cell migration, proliferation and adhesion.

* The IL1RN gene encodes the Interleukin-1 receptor antagonist (IL-1RA), a member of the interleukin-1 cytokine family. IL-1RA is secreted by various types of cells including immune cells, epithelial cells, and adipocytes, and is a natural inhibitor of the pro-inflammatory effect of Interleukin-1β.

LM: PPARα- and PPARβ- null mice are viable and do not have a phenotype unless you challenge them, by imposing stress conditions. For example, PPARα-/- mice are prone to develop more inflammation and have no cold adaptation, since the sensors are not there anymore to translate cold into fatty acid oxidation, as an energy source. PPARβ-/- mice have metabolic defects and demonstrate a significant slower wound healing. PPARγ-/- on the other hand is not viable, as it is required for placental development. Very interestingly, my colleague Béatrice Desvergnes succeeded in obtaining a mouse line which retains PPARγ expression in the placenta only, being otherwise PPARγ-/-.

LM: At present, our team is focusing on trying to understand PPAR-controlled transcriptional output in response to ultraviolet irradiation. Excessive exposure of the skin to DNA-damaging UV irradiation results in malignant transformation, and in this respect we have demonstrated that PPARβ activates transcription of target genes that promote squamous cell carcinoma – the most aggressive form of human skin cancer of keratinocyte origin – in mouse skin. We also unveiled that UV-induced PPARβ activity stimulated the expression of the proto-oncogene c-Src, encoding a non-receptor tyrosine kinase, in mouse epidermis. Consistent with this pro-carcinogenic function, we have observed that PPARβ-null mice develop fewer and smaller skin carcinomas. And more recently, we identified a microRNA (miRNA-21-3p) as a PPARβ target, and demonstrated that it promotes PPARβ-induced skin inflammation, thereby sustaining cancer progression.

– Prof. Michalik, it is presumably a superfluous question, but allow me to ask you anyway: “Would you say that your research work has clinical relevance?”

LM: Although our research has probably not an immediate impact on clinical practice – we are essentially performing curiosity-driven academic research –, I could imagine that some of our results, taken together with other people’s work in the field, could have clinical implications in the future. You know, our skin is an organ of great clinical relevance and I have always considered it important that there is a clinical touch to our research.

– Could some PPARs be considered as therapeutic targets?

LM: As a matter of fact, they already are therapeutic targets in some clinical settings: glitazones activate PPARγ and are used to treat type 2 diabetes, whereas fibrates activate PPARα and are used to treat hypercholesterolemia. This links PPARs to pathologies such as dyslipidemia and metabolic disorders – and probably cancer, which is the field we are exploring. While PPARβ is involved in the development of skin cancers of keratinocyte origin – as I just came to mention – we currently are investigating the role of PPARγ in human melanoma. And indeed, it is not inconceivable that PPARβ and/or PPARγ might, at one-time point, constitute a new therapeutic route in the treatment of certain skin cancers.

– Prof. Michalik, your research topic seems very complex: inflammation, wound healing, systemic responses to environmental cues, cancer comes into play… somehow, a whole plethora of biological processes and pathologies seem to be interconnected. How much of this complex interplay is understood at the moment?

LM: Most of the molecular mechanisms that control, for example, PPAR-ligand or PPAR-DNA interactions are fairly well understood, but the complexity of the interplay is only beginning to be grasped. I do not think that anyone has yet a clear overview of PPAR- controlled target genes and their interactions in complex systemic diseases like diabetes or cancer, although things are moving forward. This complexity also derives from the fact that PPARs are transcription factors but to act as such, they must mobilize co-activators. Essentially, PPARs behave as a platform which recruits factors. And the transcriptional outcome depends on the signals that are received, on the co-activators and the co-repressors that are recruited and the complexity of the genome. Presently, every lab in the field looks at some particular pieces of a giant puzzle.