Fisun Hamaratoglu received her PhD in 2007 from the Baylor College of Medicine for her work in the group of Georg Halder at the MD Anderson Cancer Center in Houston, USA. Her thesis work identified several upstream regulators, including the first receptor, of the Hippo tumor suppressor pathway. Her interest in growth control stems from those warm days spent in Houston. In 2008, she joined Markus Affolter’s laboratory at the Biozentrum, University of Basel, for her post-doctoral training, funded by HFSP, Marie Curie and Roche postdoctoral fellowships. In Basel, as part of the WingX.ch initiative, she established the fly wing as a model system to study scaling quantitatively and at a molecular level. Her experience in Basel enabled her to take a more quantitative approach to classical developmental biology questions.

She joined the CIG in October 2013 as a Maître Assistant suppléant and became a Swiss National Science Foundation Professor in April 2014. 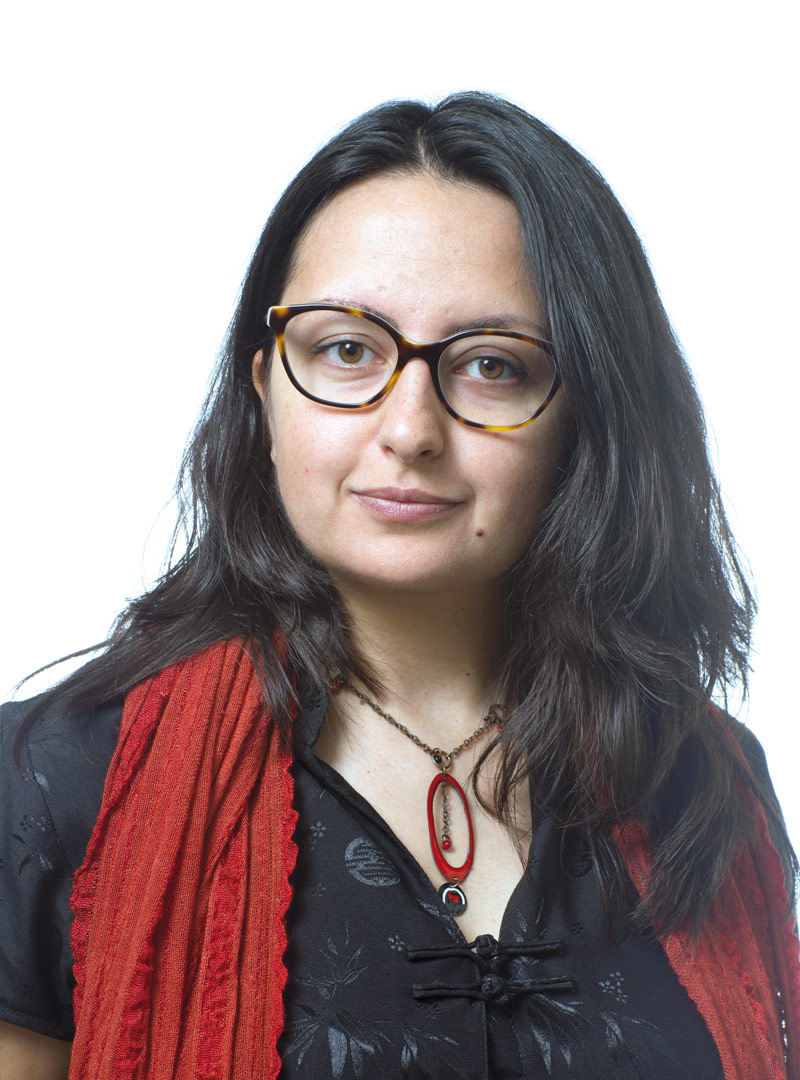 Growth control and patterning in Drosophila

We use the developing Drosophila wing tissue, the wing disc, as a model organ to study cell-cell signalling in pattern formation, size control and carcinogenesis.

Transformation of a healthy cell into a cancerous one requires multiple mutations. Intriguingly, oncogenes and tumor suppressors are often members of developmental signaling pathways that shape our bodies. A striking example of this is the Ras pathway, activity of which is absolutely essential for cell fate specification and yet its activation drives almost all carcinomas. What determines the outcome of Ras activation (differentiation vs proliferation), however, remains unknown. We found that the level of Hippo pathway activity determines the cellular response to Ras stimuli.

The Hippo signalling pathway was discovered at the turn of 21st century via EMS mutagenesis screens in Drosophila. The components and, with increasing confidence, the mechanisms of signal transduction of Hippo signalling are highly conserved. This pathway functions as a critical regulator of tissue size in flies and vertebrates. Evidence indicating the involvement of this pathway in human cancer is also rapidly accumulating.

We find that the activation of Ras pathway in cells where the Hippo activity is compromised leads to a dramatic hyper-proliferation of these cells and the resulting organ is up to 10 folds larger than normal (Figure 1). Using RNA-sequencing and ChIP-Nexus analysis, we reveal that this impressive synergistic overgrowth is due to an intimate connection between the two pathways: Hippo restricts Ras activation by directly controlling the levels of its transcription factors, Capicua and Pointed. Mutations in the Hippo pathway components thus greatly contribute to the transformation of cells with activating mutations in the Ras pathway during carcinogenesis.

Figure 1: Combined mutations in Ras and Hippo pathways induce tremendous overgrowth Control eye (A) and wing discs (B) at the end of larval development. Simultaneous removal of a transcriptional repressor of the Ras pathway capicua (cic), and a Hippo pathway kinase warts (wts) leads to formation of giant eye (C) and wing (D) discs with numerous folds. These are mosaic tissues where the lack of green marks the double mutant cells and all nuclei are marked in red. All images are shown at the same magnification and the scale bar in (A) is 200u.

We have performed transcriptome profiling in hippo mutants and found that 64% of the genes that are upregulated  (two-folds or more) in hippo mutant cells are previously unstudied genes highlighting how little we know about the target genes of the pathway and how it performs its many functions. Therefore, we set out to perform a screen to identify genes with a growth control function among these newly identified Hippo targets. We knocked down these genes using RNAi, specifically in the wings and screened for defects in wing size and patterning. More than half of the screened genes affected wing size showing that this pool is enriched for growth regulatory genes. We decided to further study Ferritin 1 Heavy Chain Homologue (Fer1HCH), downregulation of which lead to severe growth defects in wings. Fer1HCH forms the ferritin complex with Ferritin 2 Light Chain Homolog (Fer2LCH). We found that removal of either gene affects organ size linking iron metabolism to size control. We are currently investigating how changes in iron levels influence growth and whether other control pathways also influence iron metabolism.

How is the apterous mutant tissue eliminated from the dorsal compartment?

apterous is expressed in the dorsal compartment of wing discs and provides cells with dorsal identity. In mosaics, the mutant cells are excluded from the dorsal compartment of the tissue, where the gene function is essential. The current literature focuses on the movement between compartments as the main mechanism to eliminate apterous mutant cells from the dorsal compartment. We found that movement accounts for approximately 20% of clone disappearance and the remaining clones are eliminated via cell death and extrusion. Interestingly, the choice of elimination mechanism seems to depend on the position of the clones. Basal extrusion is the major mechanism of elimination in the hinge region whereas cell death dominates in the pouch. The D/V boundary is rather flexible and can be redrawn to include apterous mutant cells of dorsal origin into the ventral compartment if a clone touches it. We have recently established a protocol for laser microdissection followed by RNA-sequencing. Our next step will be to determine the signals that allow surrounding cells to detect apterous mutant cells.

Growth and patterning occur concurrently in the developing organs of all multi-cellular organisms from flies to humans. Their coordination is of paramount importance to yield functional organs of proper size and shape. How this coordination is achieved is a long-standing question. Careful quantification of growth parameters is the key to answering this question and until recently tools necessary for such quantification was not available.

Figure 2: Automatization of detection of the Raeppli clones

The left panel shows a raw image of an 80h-old wing imaginal disc, 30h after Raeppli activation, acquired using confocal microscopy.  Using Imaris XT and Matlab, we first detect all the nuclei and then cluster them according to their signal intensities in different channels using K-means (middle). The last step is to convert the clusters into 3D surfaces for obtaining volume and spatial position information (right).

We use a new tool, called Raeppli after the confetti used in the Basel Carnival. Raeppli is a lineage tracing method that permanently marks a cell with one of 4 different fluorescent markers at the desired time point. Importantly, all progeny of the first cell inherits the colour-code forming a “clone”. Since all clones are induced simultaneously, differences in clone sizes reflect differential growth rates. Therefore, cell division rates can be inferred from clone sizes. Using multiple copies of the construct, cells can be labelled with up to 20 different colours providing an impressive level of spatial resolution. These images pose a formidable image analysis challenge that we are undertaking in collaboration with the Bioimaging and Optics Platform at the EPFL. We developed a new algorithm that enables the automated detection of Raeppli clones using sophisticated image analysis software (Figure 2). Our long-term aim is to determine spatial and temporal growth dynamics after simple genetic modifications to Dpp and Hippo pathways.