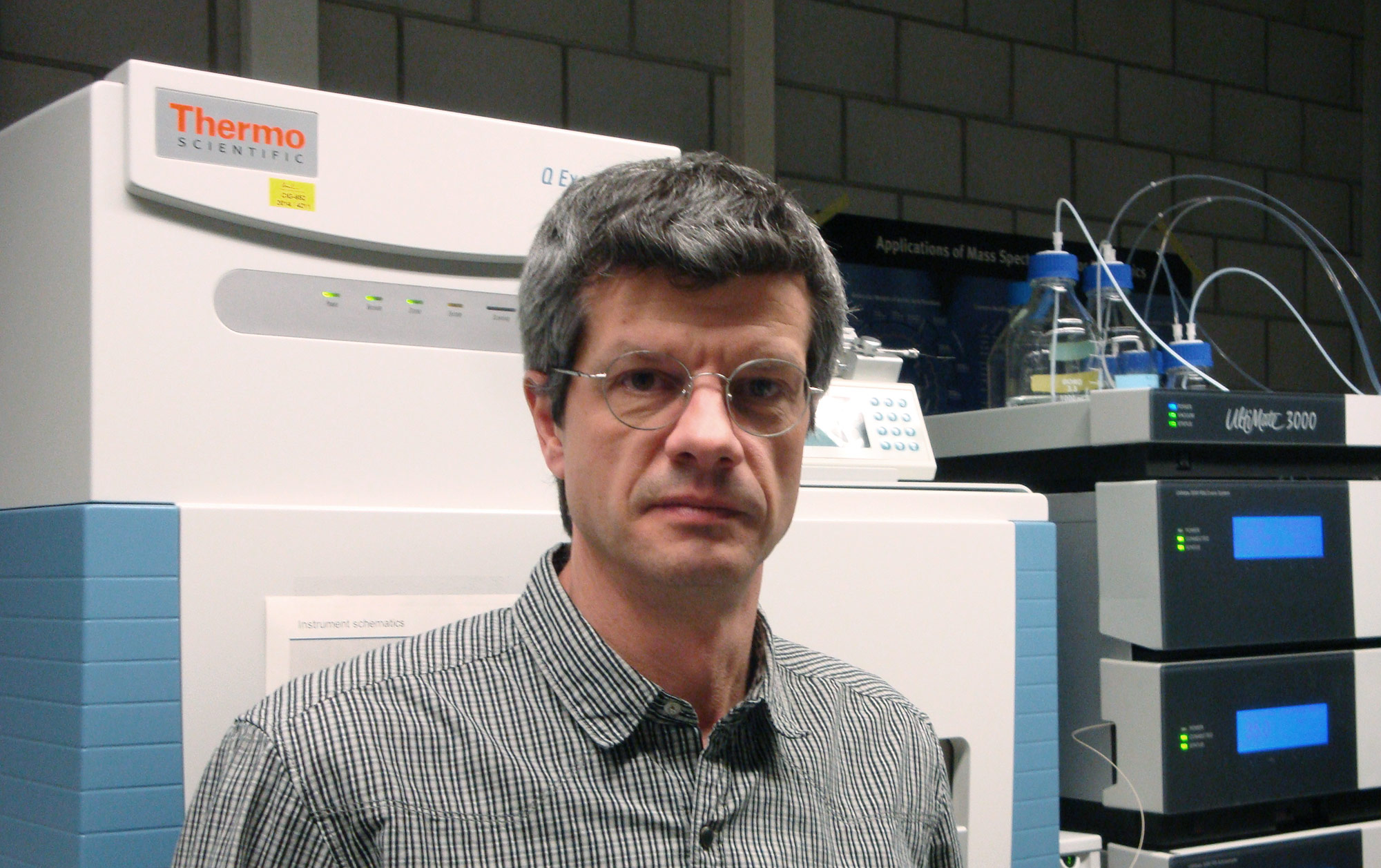 Dr. Manfredo Quadroni joined the CIG in 2003 as Maître d’Enseignement et de Recherche to coordinate the Protein Analysis Facility. The PAF supports the UNIL scientific community in research projects that involve proteomics, i.e. analyzing – both at the qualitative and quantitative level – proteins in complex samples, thereby utilizing both protein and peptide-level separation techniques coupled with mass spectrometry as the main analytical tool.

– Dr. Quadroni, could you bring back into memory your first experiences with proteomics?

MQ: Following my school years at Riva San Vitale, a small village south of Lugano, I was trained as a biochemist at the ETH in Zürich. At the same Institute, I did my PhD thesis, focusing on protein analytical techniques applied to calcium signaling molecules, although it was not called proteomics at that time.

– You were into proteomics “avant la lettre”?

MQ: (laughs) Well, that would be one way of putting it.

– Did 2D SDS-PAGE exist in those days?

MQ: Oh yes, it was a widely used technique. I did a lot of protein separations by 2D SDS-PAGE, but at the same time we were starting to use mass spectrometry. As a matter of fact, my mentor, Peter James, was among the first scientists using MASS SPEC for the characterization of proteins. This was at the beginning of the nineties.

– What happened after your PhD thesis?

MQ: Following a postdoc in Vancouver, Canada, I actually returned to my former lab to follow up on my previous research and starting to use new labeling techniques, allowing a more quantitative approach of complex protein samples. This was a hot topic in those days.

MQ: I joined UNIL in 2000, having been appointed by the Biochemistry Department. One year later, I was given the task to set up and coordinate the PAF, a core facility for proteomics. I recruited and trained technicians and employed scientists with specific know-how in the field. Our first Mass Spectrometer arrived in 2002. As of 2003, we “officially opened”, so to speak and the PAF was “Up & Running”. The facility was later transferred to the CIG in 2006, partially, and moved there completely in 2014.

– How would you describe the mission of the PAF?

MQ: Our mission is to support the local academic research community – that is to say: UNIL, CHUV and associated institutes – in the field of proteomics research. The idea is to implement and make available technologies that require specific know-how, which individual labs cannot afford to establish. Furthermore, we offer teaching and diffusion of knowledge on proteomics and its applications.

Major changes in the field

– Have you witnessed major evolutions in your field over the past decade(s)?

MQ: Two major developments took place around the turn of the century. First, the proteomics field clearly moved towards mass spectrometry as the main analytical tool, making it possible to truly sample and profile entire proteomes and making it a real “omics” technology. Secondly, a transition occurred from a purely qualitative to a more quantitative oriented approach, going hand in hand with a strong increase in sensitivity. Nevertheless, I want to point out that these developments are not comparable to the quantum leap advancements that have been so characteristic in shaping genomics, which has been changing at a speed we cannot follow in our field.

– Dr. Quadroni, now you are being very modest. I am impressed – in as far as I can judge of course – by what is going on in proteomics…

MQ: … and which I am not denying. Do not get me wrong, I vividly recall running dozens of 2D SDS-PAGE gels for weeks – needing tremendous amounts of sample material by today´s standards – and providing me with relatively little information. Whereas, nowadays we can easily compare and quantify 4000 proteins from several samples, following one overnight run. So, there have been major developments, but the point I want to make is that the field of proteomics seems to evolve somewhat more incrementally. It took a couple of decades to establish the key technologies in proteomics and get them to work properly. And it was not one single discovery that has changed the field; several different techniques and concepts had to come together to provide the improved performance. And of course, needless to say, all of this would be useless without the appropriate software, another evolution that occurred in parallel, and became very powerful because proteomics cannot exist without genomics, as we need sequence databases to search in order to find our proteins.

The dynamic range of a proteome

– How many proteins would you be able to characterize in an optimal sample?

MQ: In a standard experiment on a cell culture sample – which are the easiest samples to process and characterize – we can profile around 6000 – 7000 proteins.

– What would be the maximum range of relative abundancies that you could detect?

MQ: At the moment, the dynamic range of detection would be something between 104 and 105.

– Is 1 versus 100.000 copies a realistic spectrum of protein abundancies within a cell?

MQ: The dynamic protein range within most cells is probably at least in the range of one million. For example, a cell can have more than 1 million copies of actin, whereas the lowest copy number of some proteins is presumably in the order of 1-2. Consequently, this dynamic range is still too broad for what we actually are capable of detecting and characterizing. That is why we can detect 6000 – 7000 proteins, which is around 60 % of the proteome. For human cell lines, it is estimated that 11.000 – 12.000 genes are expressed as proteins.

– Allow me a layman’s question: could you “push” your detection limits?

MQ: The problem – given the technologies that are presently available –  to detect extreme rare protein species and push detection beyond 7.000 proteins in a complex sample is that you have to start with much more material and invest much more time: expanding your sensitivity limits from 4.000 to 8.000 proteins is not twice as difficult, it is 10 times as difficult. It would involve fractionating the sample and detecting the proteome in each of the separate fractions, a process that would take at least 2 weeks of mass spectrometry on one single sample, as compared to the 12 hours we usually need with a standard sample. So, it is not entirely impossible to push the detection limits to their extremes but not realistic at the moment, except in very special cases and/or conditions. But detecting proteins with a 10 – 20 copies could be possible.

– Do you expect major scientific and/or technological advancements for the distant or not too distant future?

MQ: I certainly do hope for new technologies, but I am not sure whether I can expect them. I have the feeling that in our field, MASS SPEC may be facing its limits and is approaching saturation, although its importance remains unquestioned. What I do consider possible is that mass spectrometry might branch off into different technologies. Keep in mind that MASS SPEC is more or less used for every aspect of proteomics: from total proteome profiling – including relative or absolute protein quantification – over broad-scale analysis of post-translational protein modifications (PTM).

– Dr. Quadroni, I have to admit that you caught me off-guard. Until this very moment, I had not even considered protein modifications, the biological relevance of which can hardly be overestimated…

MQ: Rest assured, PTM´s are going to keep us at the edge of our seats for the next decades. The differences in the proteome as a result of posttranslational modifications is at least one order of magnitude higher than the complexity of the proteome itself. PTM´s constitute at the same time, both a technological and a scientific challenge: characterizing modifications, such as phosphorylation or ubiquitination of a particular protein in a complex sample is one thing, but determining unambiguously the resulting biological function is yet another issue. As I just said, I can only hope for a new technology, enabling us to profile the composition and the amount of each protein in a complex sample, and allowing single molecule protein sequencing.

– Are you aware of new technological developments in the field?

MQ: I know that some people are trying to adapt nanopore technology – which, at present is a big development in genomics and high-throughput sequencing – to proteomics, but is far too early to make statements on this, let alone to say anything conclusive on the matter.

– What would be your scientific dream. Please feel free to speculate.

MQ: The ultimate dream is to perform single cell proteomics, thereby characterizing and quantifying every protein in a given cell, and characterizing each post-translational modification, whilst determining its biological function.

– You have still some work to do.