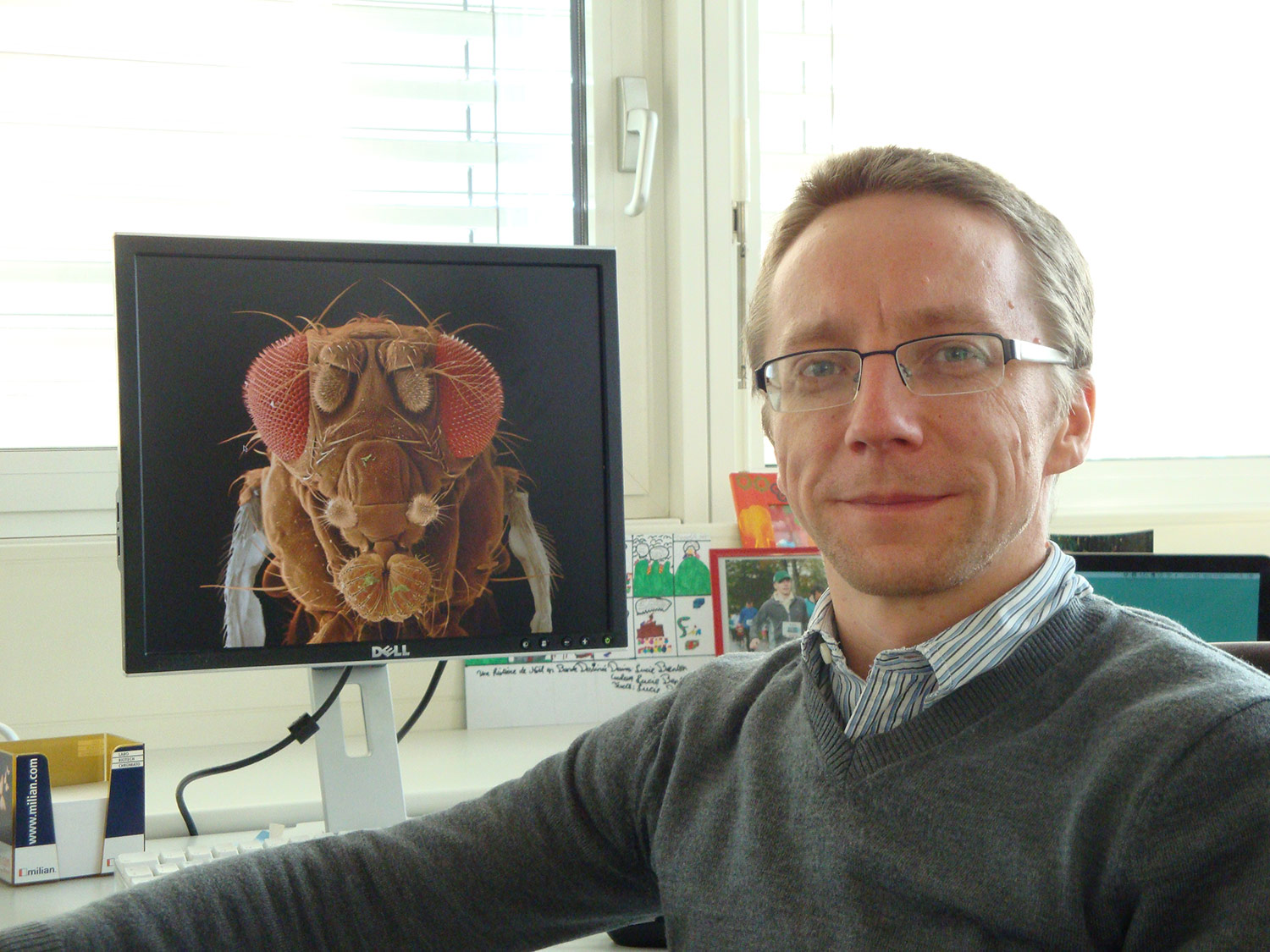 Prof. Richard Benton and his team would like to understand how odours can trigger behaviour. Using Drosophila as a model organism, they are elucidating the signalling pathways involved in capturing and processing odorant cues that will provoke a behavioural response in the animal. Prof. Benton’s group is approaching this complex interplay between many actors from both a molecular point of view – characterizing, for example, the receptors involved and their interaction with ligands – as well as from a broader evolutionary perspective, ultimately trying to answer fundamental questions concerning the origins of neuronal circuits and behaviour.

“Odors have a power of persuasion stronger than that of words, appearances, emotions or will.”

Patrick Süskind – Perfume: The Story of a Murderer (Diogenes, Zürich 1985)

How do flies fall in love? Ionotropic Receptors and courtship behaviour

– Prof. Benton, could you briefly comment on your research?

RB: We’d like to understand how odours can induce specific behavioural responses in animals. Using Drosophila as a model organism, we are characterizing the molecular pathways and the neuronal circuits that receive and process informational cues and act “upon information received”, telling the animal what to do. During my first years at the CIG, our team has been focusing on Ionotropic Receptors (IRs), a new family of odour-sensing ion channels as we have shown. We began by characterizing their expression and – through generating mutant flies lacking particular IR genes – their function. For example, we showed that an IR-expressing olfactory circuit, which is sensitive to odours emanating from the flies’ food controls courtship behaviour.

– And this was unforeseen?

RB: It was certainly an unexpected finding at that time, because sexual behaviours were generally thought to be controlled by chemical signals, called pheromones, which are produced and interpreted by members of the same species. These observations led us to formulate the hypothesis that one or more of the IR-activating odours can function as a type of environmental aphrodisiac – keep in mind that flies exclusively mate in close proximity to their food.

– Where do IRs come from?

RB: By comparing the sequences of IRs with other protein families, we showed that these receptors derived from ionotropic glutamate receptors, a highly conserved family of synaptic ion channels. We therefore think that IRs became specialized in detecting external chemicals, rather than internal chemicals. This project led us to become interested in the evolution of IR genes and their neuronal circuits, as a model to understand how nervous systems change over long timescales.

– Your work has demonstrated that IRs are involved in a wide range of sensory systems.

RB: Yes, and this has been one of the most exciting aspects of our research during the past few years. Although we first characterized the role of IRs in the detection of odorant cues, we now know that they also function in a whole array of other sensory modalities, such as taste- and temperature sensing. The mechanism underlying such functional diversity is still unclear. IRs all share the same basic transmembrane protein structure, and we believe that binding of a ligand to the extracellular ligand-binding domain results in a conformational change of the receptor, causing the ion channel pore to open. We’d love to know how IRs have evolved the ability to respond to different odours and tastants, as well as to changes in temperature and humidity.

– And provoke an appropriate behavioral response?

RB: Indeed. This type of research is a key aspect of understanding how the brain works: how can physical and chemical cues from the environment – represented as patterns of neuronal activity in the central brain regions – lead to appropriate action? Many research teams, including our own, have begun to map the neuronal circuits underlying sensory representations in the brain, as well as the circuit mechanisms that allow the integration of different types of sensory stimuli. This is a key aspect, enabling us to appreciate more complex neural functions, such as decision-making, learning and memory.

RB: In parallel with our interest in the origins of IRs, we’ve also investigated the evolutionary history of the Odorant Receptor (OR) and the Gustatory Receptor (GR) genes, encoding a distinct class of insect chemosensory receptors. These receptors constitute a remarkable group of proteins because, despite their important role in controlling insect behaviour, we have very little idea about how they function. They are structurally unrelated to vertebrate odorant receptors and have no recognizable similarity to any other protein family.

– Did you find some clues as to where this gene family came from?

RB: In searching for answers, we have been – and as a matter of fact, still are – scrutinizing ever increasing genome sequence resources. Although ORs and GRs were long thought to be insect-specific, we discovered OR- and GR-like genes in other species, enabling us to trace their evolutionary origin. We obtained evidence that GR-like genes must have been present in the ancestors of metazoans – you find them for example in non-bilaterians such as Cnidaria, including sea anemones. And although vertebrates appear to have lost these genes, we did find some in Echinoderms, such as sea urchins, which are much more closely related to vertebrates than insects.

– Can you speculate on the evolutionary ancestral role of GR-like genes?

RB: We showed that in Cnidaria and Echinoderms, GR-like genes are expressed at early developmental stages, before chemosensory neurons have developed, suggesting that the ancestral role of these genes was not in chemosensation but in development. We have obtained some evidence to support this hypothesis by demonstrating that knock-down of the expression of a GR-like gene in the sea anemone interferes with early developmental pathways: gastrulation proceeds normally but thereafter defects in patterning of the apical pole – where sensory organs will subsequently form – are observed.

– Is the role of these GR-like genes across different animal phyla understood?

RB: No, our knowledge of GR-like genes across the animal kingdom is still fragmentary. Most of what we know is restricted to ORs and GRs in Drosophila and other insects, where they are expressed in small sets of neurons in different chemosensory organs and detect particular odours or tastants. But our work on sea anemones raises the possibility that members of this protein family could have different functions in other phyla.

Do flies have a free will? A look into the future

– Prof. Benton, into which direction are you guiding your research team?

RB: We presently focus on trying to understand the evolution of neuronal circuits. To tackle this problem, we are comparing the olfactory behaviour between Drosophila melanogaster and its close cousin Drosophila sechellia, which displays different behaviour in response to the same sensory stimulus. We try to figure out why the neuronal output differs between those closely related species. Is it because they have different olfactory receptors? Are these receptors expressed in different neurons? Do these neurons wire up differently in the brain?

– How do you plan to tackle these questions?

RB: One way is by identifying receptors that have changed their function between species and characterizing the responsible differences at the molecular level. Another way is by investigating circuits which have largely increased the number of sensory neurons that express a given receptor in D. sechellia, as compared to the equivalent circuit in D. melanogaster. Across diverse animals, it has often been noted that when an odour – as a matter of fact, any type of sensory stimulus – is particularly important for an animal, it will “amplify” the neuronal circuit dedicated to process that particular information. Such phenotypic evolution is somewhat reminiscent of the expansion of the human cortex. What caused the enormous expansion of neuron populations – linked to an increase in our cognitive abilities – in our brain, compared to other primates? Our studies in Drosophila provide a simple model to address this general question. We hope they will reveal how genetic programs are “tweaked” during evolution into making more neurons within a specific circuit.

– What are your scientific dreams? Feel free to speculate.

RB: I would like to understand the evolution of behaviour and define the principles by which behaviours change, unraveling the gene networks, molecular pathways and neuronal circuits involved. One can imagine many different levels at which nervous systems can undergo evolutionary changes. This is a complex problem to tackle, but I think the Drosophila model is very powerful in providing insights that will be of general relevance in the animal kingdom.

– Do you believe in free will?

RB: I believe that brains are sufficiently complicated and sufficiently stochastic to allow a certain degree of free will.

– Could you imagine that Drosophila has a free will?

RB: I don’t think that we can confidently say that a fly does not have a free will. Animal brains are defined on a wide spectrum of complexity and, though Drosophila’s brain is fairly small – composed of 100.000 – 200.000 neurons – it is nevertheless capable of incredible tasks, including control of flight. But it’s a very difficult question to answer, because we are still lacking a clear, unambiguous neurobiological and mechanistic definition of free will and consciousness.