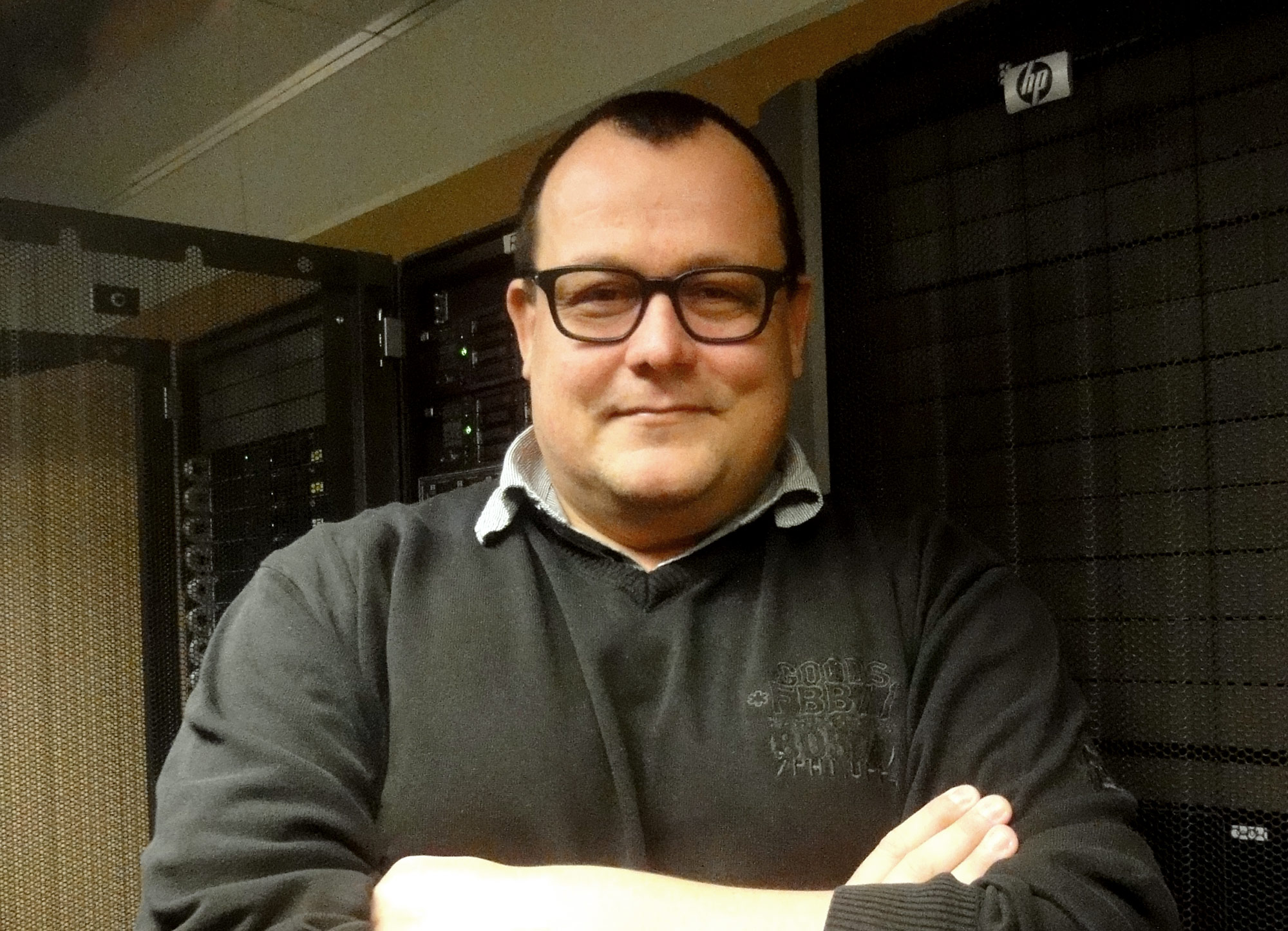 Prof. Ioannis Xenarios is Director of two groups within the Swiss Institute of Bioinformatics (SIB): the Vital-IT group in Lausanne and the Swiss-Prot Group in Geneva. Vital-IT maintains a competence center in bioinformatics and computational biology, providing supportive functions and infrastructure for research projects at the UNIL, EPFL, UNIGE, UNIFR and UNIBE, as well as training biology and biomedical scientists.

The Early Days of Vital-IT

– Prof. Xenarios, given your professional record and functions, I was somewhat surprised to find out that you were trained as an immunologist.

IX: Yes indeed. For quite some time, I even considered to become a medical doctor, but eventually I studied Biology at the University of Lausanne and received a PhD in Immunology – doing research in the field of retroviral biology – from the Ludwig Institute of Cancer Research and the Institute of Biochemistry, at the University of Lausanne. As a matter of fact, as a student, I had a fascination for both Immunology and Neurobiology, being drawn to what I considered the inherent complexity of both disciplines. This fascination has never faded.

– Were there no computers around?

IX: (laughs) Sure. As of young age, I always had a lively interest in computing, and before I finished my PhD, I absolved a master’s degree in Bioinformatics. After that – as a postdoc at the University of California, working in the team of David Eisenberg – I did help create the first database of Interacting Proteins (DIP) and later, when I became head of Translational Bioinformatics at Serono, I was involved in developing computational methodologies in the field of genome-wide association studies, proteomics and systems biology. So, yes: computers have always been around, but allow me to emphasize that, as a bioinformatician, I have always strived to keep a broad interest in many biological domains and disciplines.

– What was the status of Vital-IT?

IX: In those days, Vital-IT was a small High Performance Computing Center located at the CIG, comprising a group of 8 people, set up as a joint platform for the University of Lausanne, the EPFL and the University of Geneva. My aim was to reshape Vital-IT from a computing center towards a competence center in Bioinformatics and Computational Biology, with the right mindset and the critical mass to support 21st century bioinformatics and computational biology. To that end, I needed to do two things: first, employ people with the right expertise and organize them into networks of activities and secondly, providing the right computational framework and integrate Vital-IT into all other regional data-generating platforms.

– Have you experienced major developments in your field over the past decade?

IX: What has definitively changed over the years, is the perception of many biologists towards Bioinformatics and what it can provide for them. Nowadays, a lot of group leaders have embedded a bioinformatician into their team, which to some extend has been transformative for their research, because a data scientist – a bioinformatician is mostly a data scientist, nowadays – allows them to experimentally pursue questions which otherwise would not have been possible to answer…

– … as many group leaders have switched their research strategies to gathering complex data.

IX: Whether data are “complex” or not is to some extent a matter of perspective, but what one can say is that the complexity in this context is often linked to the amount of data – which might be the same type of data as before, and in that sense maybe not “complex data” – and in the way they always need to be analyzed. This change of perception has also had an impact on Vital-IT, in that we have developed innovative algorithms and methodologies, adapted to ever changing experimental settings and new types of questions that seek answers. These embedded bioinformaticians are like sensors, as they provide us with important information enabling us to make strategic choices for the coming years and defining areas where we need to teach and/or develop software and competencies.

– Have you witnessed other major changes?

IX: Over the past couple of years Vital-IT has produced algorithms for diagnostic tools, something I would not have envisioned 10 years ago. For example, we have developed an algorithm for a non-invasive prenatal diagnostic test, which is presently on the market. One could argue that certain aspects of Bioinformatics have turned towards decision-making – allowing, for example, to detect genomic deletions or duplications in an unborn – whereas previously Bioinformatics was predominantly a research-supporting activity, so to speak. I expect this trend to continue…

– … Bioinformatics as a decision-making tool.

IX: Indeed, but if we want to involve algorithms in decision-making, we have to accomplish two things:

* The analysis has to be fully deterministic: if you run the same algorithm 10 times, you should get 10 times the exact same answer. Presently, this is not the case: little in the field of Bioinformatics is deterministic, but rather heuristic- based.

* Presently, there exists a discrepancy between the sequencing of a human genome – which can be done in a relatively short amount of time – and the data analysis and interpretation, which takes much more time and constitutes the rate limiting step in this process: we are only scratching the surface.

We are focusing on these issues and have managed to reduce the computing time for a given data analysis from a few days to less than one hour, by using special types of computers, and designing algorithms in a fully deterministic manner. But, clearly, we are not at the end of the road and we are also not the only one to work on this. There is still some mountain-climbing to do.

– Are there things you would like to see changed in the not too distant future?

IX: Yes, I would like to see a few matters evolve. For one, Vital-IT and Bioinformatics need to be tightly coupled to the research activities. Over the past decade, I have been striving for a firm embedding of our expertise within the scientific community. For example, with Professor Thorens we share an innovative medicine joint undertaking, where Vital-IT is the initial data coordination center for diabetic patients in Europe, some of them have been followed over the past 20 years. These are the types of initiatives I would gladly see go up during the next years in other areas such as immunotherapy and neurodegenerative diseases.

IX: Along similar lines, I would like to see a higher level of interdisciplinarity. I just came to mention that there has been a change of mindset in not a few biologists towards bioinformatics, but that does not mean that there is no space for improvement. I would like to convince more researchers that Vital-IT does not only supply technical aspect (computing and storage), but provides both technical and scientific input. In all too many cases, there still exists this artificial discrimination between the “technical” and the “scientific” aspects, and that does not bring us forward. I do not consider myself a scientist or a technician: I am both, at the same time. In order to have a high-quality platform that is effective, you need to have both. If you discard the science, you become technical and you just turn data around. If, on the other hand, you only care about your science, you will fail to understand fundamental, technical aspects of your type of data and their analysis. So, there needs to be a balance, which – and I cannot stress this enough – is highly important.

– What has the future in petto?

IX: I expect a lot of changes; some algorithms basically will ask “ give us all unstructured data” and they will be able to structure and help answer all questions we ask, a dream perhaps. Going hand in hand with this, is the fact that computing systems will have to be training themselves whilst analyzing the data. A key concept in this context is artificial intelligence. The big question is whether they will change the way we do research in biology and medicine. Only time will tell.

– Something else appearing on the horizon? Please, feel free to speculate.

IX: If you really ask me to widely speculate, I could imagine that, at some point, so-called “quantum computing” and “neuromorphic processors”– which are slowly entering our field – will dramatically increase performance and allowing us to compute at extremely fast rates or compute in different manner. Allow me to give you one example: at Vital-IT, we have been analyzing epistatic-effect interactions between genomic loci, which involved calculations of more than 3 billion interactions. Performing this type of analysis on a standard computer would have taken us about 3.000 years…

– … then you will not be home for dinner.

IX: Most probably not, but we were capable of transforming and optimizing the software and got the result in 48 hours on 64 computers. So, I believe big changes are laying ahead of us in the way data are going to be analyzed.

– And, of course, more and more data will be generated.

IX: Indeed, and because of that we have to decide which data to keep and which data not to keep. At Vital-IT we currently receive more than 40 terabytes of data every week and we need to be able to define what matters and what matters not. And this will become a big challenge in the future. So, one could say that we are facing the same challenges as the librarian of the Alexandria library, when archiving his books…